The Caribbean is at the forefront of early warning systems An EWS transmits the water level in the canal every 10 minutes to alert the community to the possibility of flooding, and also reports the temperature and wind speed and direction in Speightstown, Barbados.
UNDRR

Downtown Bridgetown, Barbados, smells of ripe fruit and incense. In the thriving marketplace, sellers and buyers dance to the hectic pace of midday in contrast to the Caribbean Sea, placid and shimmering on the horizon.

The sea is a major character in the life of the island. Past and present, a source of food and tourism, water is the island's main ally in its development. It is also, however, a permanent risk that requires effective planning and coordination to avoid disaster and ensure the prosperous lives of Barbadians.

Early warning systems are a serious issue in Barbados. For several years now, the Department of Emergency Management has undertaken the implementation of several projects, tsunami preparedness being one of the leading ones. This year, the International Day for Disaster Risk Reduction focuses on the importance of increasing early warning systems, as stated in Target G of the Sendai Framework: "Substantially increase the availability of and access to multi-hazard early warning systems and disaster risk information and assessments to people by 2030".

Earlier this year, UN Secretary-General António Guterres urged all countries to achieve 100 per cent coverage of their populations by early warning systems within the next five years. "Early Warning Systems save lives," he said. 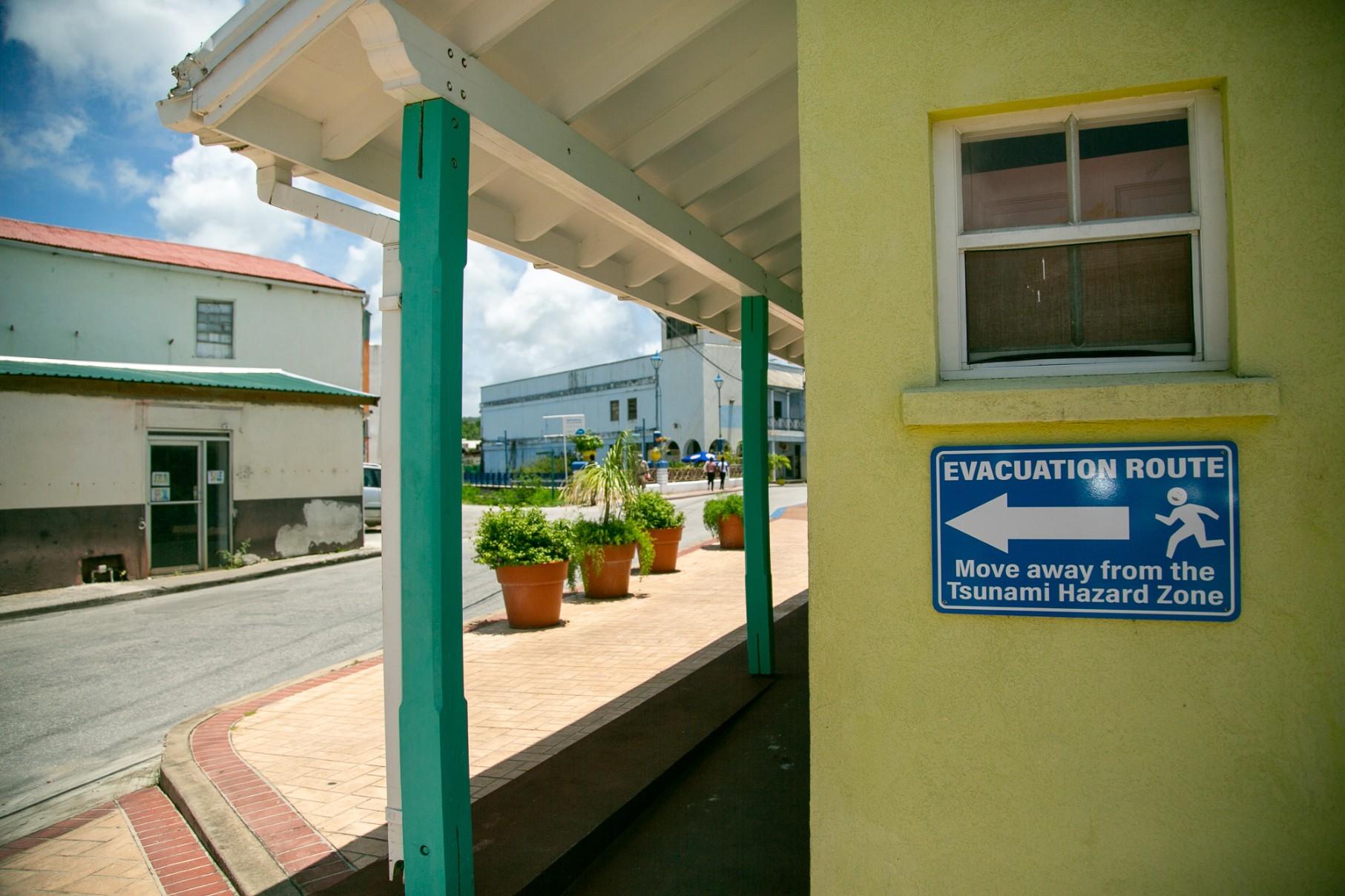 From the waterfront in the northern Barbados community of Speightstown, evacuation signs are everywhere. They point the way to a shelter after the alarms on the main pier sound. Further inland, on the seawall, a two-metre-high map has details of the most sensitive spots in the community, evacuation routes to shelters and the location of hospitals and other sensitive facilities. To minimise the possibility of failure in the face of the hazard, they conduct an annual drill, including all protocols and procedures in coordination with all authorities.

"Barbados' experience with respect to disaster risk management and multi-hazard warning systems has been one of cooperation and collaboration, recognising that no single agency has all the resources available. It is a multi-state collaborative process, which is one of the fundamental pillars of the disaster risk management system," says Kerry Hinds, director of the Department of Emergency Management.

The collaboration is indeed multi-state. About 500 metres away, on the banks of a canal and among mango and breadfruit trees, a small, one-metre-high fence guards a vital tool: a system that transmits the water level in the canal every 10 minutes to alert the community to the possibility of flooding, and also reports the temperature and wind speed and direction.

Neighbours appreciate the system for the new conditions: "I feel much safer," says a grey-haired man in his 50s. This is just one of the 100 stations Barbados proposes to install over the next few years.

This community-based system on the coast of the Caribbean country is also part of an extension plan. In the coming months it will include new communities in the south of the island, including Bridgetown itself, where the Caribbean nation's most hectic and cosmopolitan life takes place. 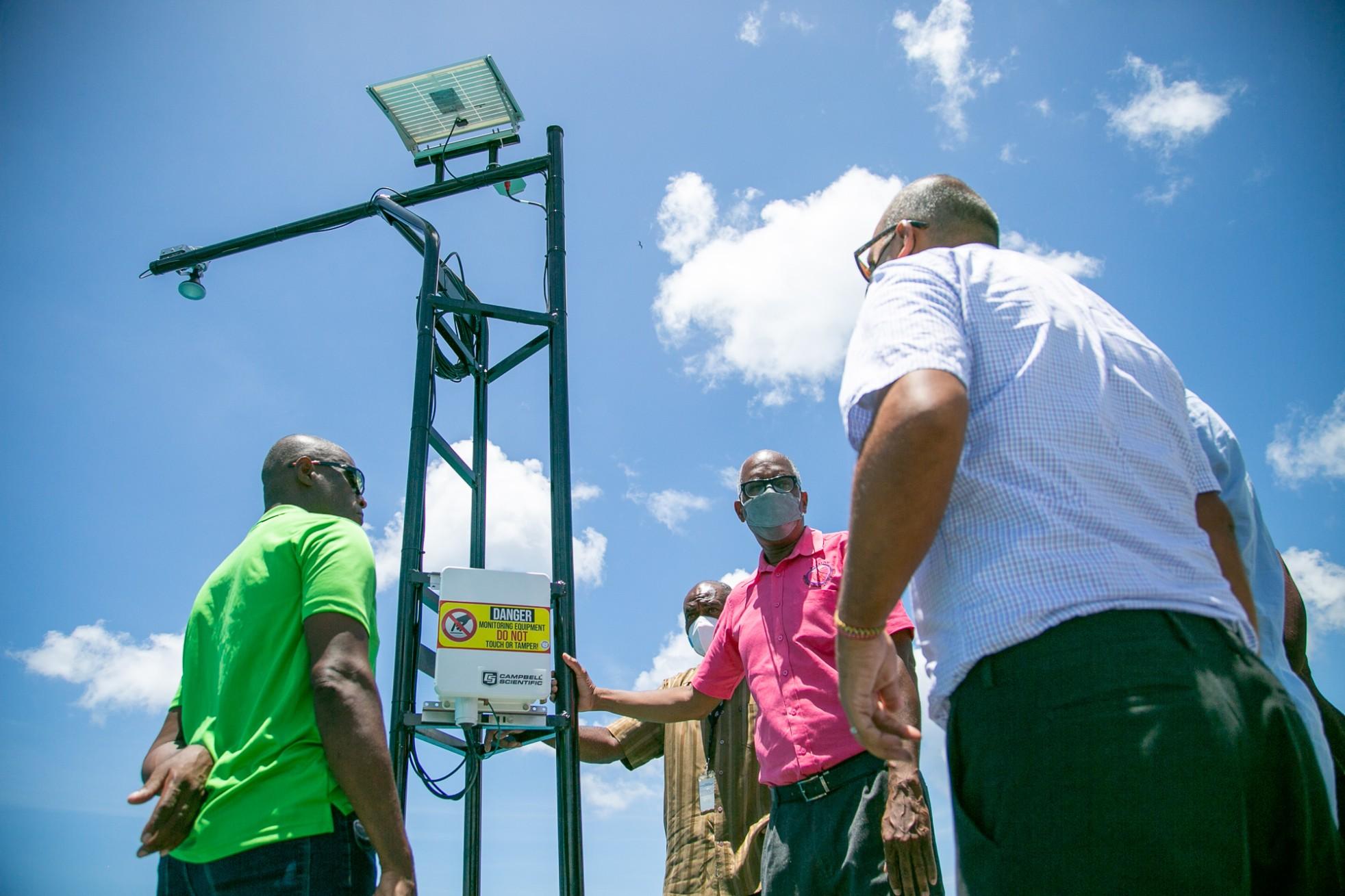 A region at the forefront

Barbados is not the only Caribbean country making rapid progress in the planning and development of multi-hazard early warning systems.

St. Vincent and the Grenadines, for example, had to deal with several simultaneous hazards: a volcanic eruption in the midst of the COVID-19 pandemic, with a dengue crisis and in the middle of the Caribbean cyclone season. "A multi-faceted early warning system has to be agile enough and able to adapt to the complexities of the hazards we are now seeing in the region. And it has to be able to encompass all hazards, not just natural ones," says Michelle Forbes, director of the island's National Emergency Management Organisation.

In this sense, Peter Williams, technical officer at the Caribbean Public Health Agency, elaborates on the importance of further strengthening the inclusion of biological hazards, such as COVID-19, for example, in early warning systems. "Biological hazards, when detected early, can be stopped and/or reduced to ensure that a smaller part of their population is affected by an impact. And having this built into an early warning system allows us to stop it early, stop it sooner."

Both Forbes and Williams agree on one point: the Caribbean is at the forefront of implementing Early Warning Systems, much more so with a multi-hazard approach. The experiences of recent years have inevitably strengthened planning and coordination to deal with hazards, whatever their origin, magnitude or concatenation.

We recognise the intersectionality of hazard impacts and the fact that we need to have a good and adequate multi-hazard early warning system that is adapted to the complex reality of the Caribbean," said Andria Grosvenor, Deputy Executive Director of the Caribbean Disaster Emergency Management Agency (CDEMA), during the Regional Consortium of Early Warning Systems Meeting held last September in Barbados, with the support of the Climate Risk and Early Warning Systems (CREWS) initiative, which explored possibilities for coordination and strengthening of existing and potential institutional arrangements in order to increase the effectiveness and harmonisation of multi-hazard early warning systems. "We have established a regional early warning system among all the key actors in the consortium, in the region. It's really a coalition of the willing," Grosvenor added.

Climate change and insufficient risk management will cause the world to face 1.5 disasters per day in the next decade. Early warning systems, which can reduce damage by up to 30 per cent within 24 hours, are becoming increasingly vital. "Investments in early warning are now more urgent than ever," said Raul Salazar, head of the UN Office for Disaster Risk Reduction - Regional Office for the Americas and the Caribbean. "We must strengthen international support to least developed countries and small island developing states so that they can establish and expand their early warning systems," he added. The main shelter in Speightstown is about two kilometres offshore. It is a hilltop school. From there, you can see the vast, paradisiacal waters of the Caribbean. With enough time, the evacuation to the hill should not cause any major complications. That is what the implementation of an early warning system is all about: it is the difference between life and death. Put even more simply: early warning systems save lives.